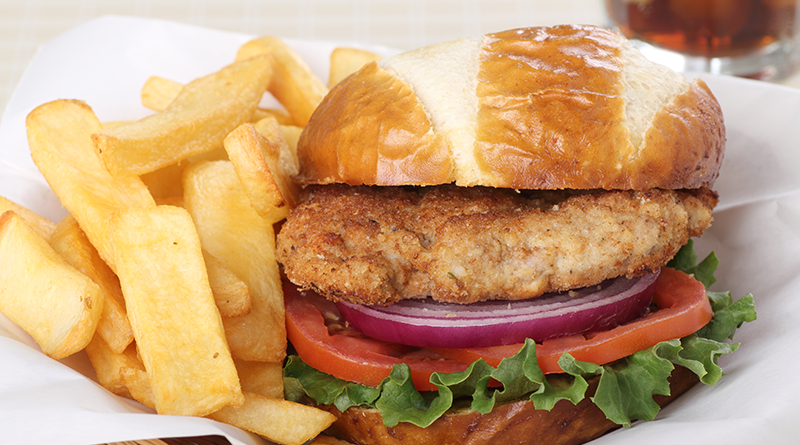 by Jay Kerner
St. Joseph, Mo. – St. Joe is finally capitalizing on our tenderloin fame. Even our popular summer league baseball team, the St. Joe Mustangs, have jumped on board with an awesome promotion. This summer, they’re changing their name to The St. Joe Tenderloins for four games. They’ve got a new logo, snazzy new uniforms, and even a tenderloin mascot in the works. The Regular Joe loves it and will be hosting some contests to win tickets. We may even team up with them for an end-of-season tenderloin event.

But how did St. Joe become the tenderloin capital of the world? Let me explain. If I was writing a letter, it would start with something like, “Dear Iowa, Illinois, and especially you, Indiana, I apologize.” I never intended to badmouth the fine examples of BPTs (Breaded Pork Tenderloins) from your states.When I started trademarking the phrase “St. Joseph, Missouri: Tenderloin Capital of the World!” it was pure, grass-roots tourism. I’d been questioning whether my hometown had anything to brag about beyond a dead outlaw (Jesse James) and a failed small business (the Pony Express). It was hard to find any consensus.

But I became fascinated by a Facebook stream where a former resident planning a visit asked for tenderloin recommendations. Everybody and their brother had one, and each was “the best.” It went on and on, eventually morphing into the best in memory for many folks. I couldn’t believe the passion. Finally, something St. Joseph’s natives can agree on. Not which one was best, that’ll get nearly as many answers as people you ask, but tenderloins in general, oh my gosh, do we love them!

It’s hard to find a restaurant here that doesn’t serve one, and most all of them are at least very good. Several are damn good. Heck, even our fritters are decent. But that’s where I went too far in trying to rally the troops. I wrote a piece challenging all comers. I never expected it to go farther than 50 miles or so, but a friend posted it to a Facebook group called Pursuing Pork Tenderloins, where it wasn’t well-received among their 65,000 plus devotees. To defend my article, I had to request membership.

The most popular theme was “Who the hell does this guy think he is?” Answer: just some knucklehead with a big mouth. The second was the accusation that we had somehow stolen the trademark from somewhere else. Answer: it was more than a two-year odyssey of lawyer fees to research our claim and search out counterclaims. There weren’t any. It was published in various public records during the process for government representatives of every state to challenge. None of yours did. Nor any from anywhere else.

That’s how we got it. But let’s talk about why. I’ve given this a lot of thought. Let’s assume the popular origin story is true, that our favorite sandwich was born in Indiana. I’m not foolish enough to argue against that, despite the fact that Germans have been frying pounded pork since shortly after they walked upright. Be that as it may, think about the major happening when it debuted on these shores full of Westward Expansion. Now we have people moving right to left in a steady progression across the country, taking with them only the things they most cherished, the things they missed from home. The tenderloin.

They were pioneers from Indiana, moving west through Illinois, Iowa, and Missouri. And it wasn’t just the “hoosiers,” who carried the tenderloin with them, but gobs of folks from farther east passed through on their journeys. How many of them, once tasted, would ever forget the tenderloin sandwich? And so it moved west with the migration. Until it bumped up against the Missouri River and didn’t cross it again for nearly a century. Western Expansion hit a major roadblock there. There was no railroad beyond St. Joe. New arrivals marveled at the electric lights of this last vestige of civilization and looked across the river at the darkness. Only the hardiest of souls made the crossing. Some went out a ways and turned back. But a bunch of your ancestors settled here. Folks with a taste for tenderloin. And they found two things here already: a thriving pork slaughtering industry, and the first saltine cracker.
It was a perfect tenderloin storm.

And that’s my theory of how so many of the best tenderloins from parts east ended up here. We have some big ones, though the fascination with that aspect isn’t as strong here as in other places. You can find them thick and thin, heavily seasoned, and less so, with many cuts and coatings. Recipes have been passed down through families for generations. St. Joe is where all the tenderloins ended up. They didn’t cross the river for a long time. You couldn’t find one in Denver even 25 years ago. The whole west coast, from San Diego to Seattle, same deal.

They’ve finally spread some now. You can find a decent one within a reasonable drive of most places if you take the time to dig. The Pursuing Pork Tenderloin group on Facebook is a great resource.

But another misstep was limiting my promotion to St. Joe only. They’re all around us, too. Every little town seems to have one and the bigger towns have several.
We’re just tenderloin crazy around here and it’s your fault Iowa and Illinois. And especially yours, Indiana!

So, come see us in St. Joe. Try our tenderloins. You may not find one exactly like your favorite, back home, but there are so many good ones, you can’t help but find one you’ll like.